An Inner Engineering teacher, Tejas, shares his unique experience of teaching the class in Marathi language to the villagers in Ghatanji in Maharashtra where the Rally for Rivers team is working to revive the Waghadi river.

Tejas: The last Marathi class in Ghatanji was a really special experience for me. There were almost no local volunteers here. But we had Nadi Veeras!

Nadi Veeras have survived the extreme summers here where the temperature shoots up to 48 degrees Celsius and there is acute water scarcity.

I had the privilege of working with this absolutely fantastic group of young people! Having gone through a phase of training at the ashram which was relatively brief compared to the nature of the task they have set for themselves, they plunged directly into action. With the sheer fire in their hearts, they have transformed themselves so much since I had seen of them six months ago. Out of the 34 of them that are here in Ghatanji, only a handful can speak Marathi while all others manage with Hindi. But the level of trust they have gained in the village is simply incredible. It is not at all an easy job to find a way into the hearts of these village people who have been living in such harsh social, economic and climatic conditions for so many years. All this, in spite of coming from an organization about which people in these parts have barely heard anything.

The Nadi Veeras have survived the extreme summers here where the temperature shoots up to 48 degrees Celsius and there is acute water scarcity. I really bow down to their hardy spirit, that despite the many challenges, they did not give in. Right now, the villagers have accepted them so completely that many participants mentioned that these Nadi Veeras are like a part of their family. What I found amazing was the love and care with which they are working. They know not only every single person in the village that has been assigned to them, but all the members in each family, who they are, what they are doing and what problems they have, everything. And the villagers also seem to share everything with them.

Preparing the Program Hall for the Class 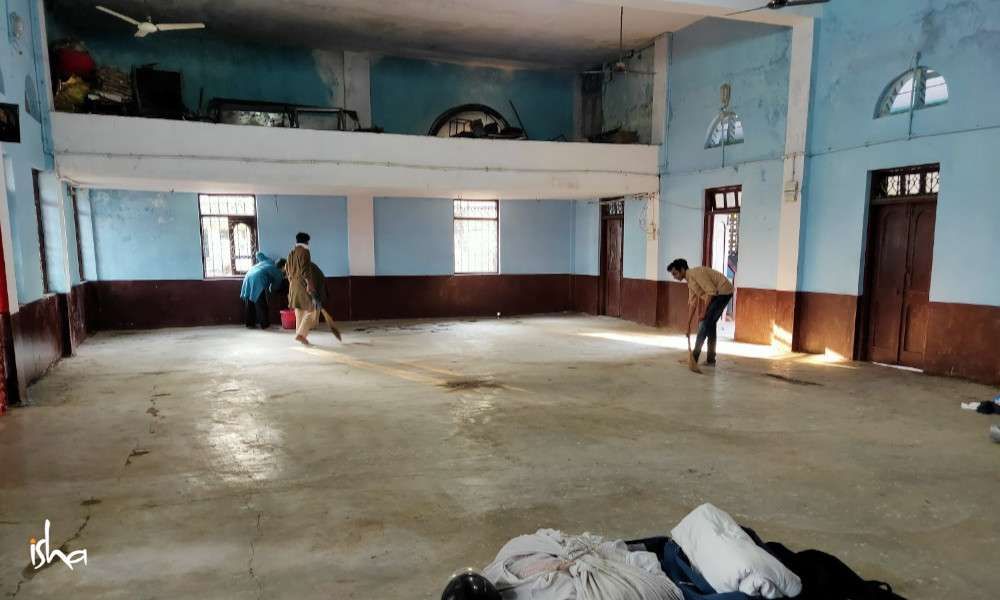 When I reached the hall for the class and saw its condition, I could not wrap my mind around how to get it in an appropriate shape for conducting the sessions. We asked the hall authorities if they could clean it for us. They agreed, but even after they cleaned it, it still looked awful. Parts of the floor were falling out. The bottom portions of the walls corners were splattered with red spit marks. And the toilets were scary to say the least! But when the volunteers got into action, slowly the place started changing. They used concentrated acid to clean spit marks and then cleaned the acid marks with soap. By evening, suddenly the place was totally transformed.

They made the hall and even the surrounding area feel like a sacred space. Even the volunteers who worked there could not believe how it happened and how different it felt. I have seen so many halls being set up for a program but the transformation here touched me so deeply. With meager resources, to transform such a neglected space into one where if you walk in, you feel a sense of love and care wherever you look – this definitely awakens something in you that is too tender to be expressed in words.

Just four days before the program, we had only 8 registrations, but on the day of the program we had 110 registrations. The Nadi Veeras had gone into every house and personally invited so many people. We had to close the registrations because of the limited hall capacity and about 20 more people wanted to participate, but could not be accommodated this time.

Get weekly updates on the latest blogs via newsletters right in your mailbox.
These simple people in this small village of Ghatanji sitting in an Inner Engineering program with complete trust and devotion for Sadhguru.

Just after the introduction, there was so much energy in the class. I looked around in the break and it felt like some festival with everybody’s faces bright and smiling. Personally, for me it was like living a dream that I did not know would ever become a reality. These simple people in this small village of Ghatanji sitting in an Inner Engineering program with complete trust and devotion for Sadhguru.

From the very first day, they came like little children. Watching Sadhguru’s videos with them was such an intense experience simply because of the way they responded. By the third day, after the session, many people were coming to me and sharing what a great blessing it was from Sadhguru himself that such a program happened in their village. Almost everybody in the class knew everybody else, and they are the kind of people who cannot spend one moment without talking to the person next to them! But by the fourth day, everybody was sitting still with eyes closed as “Yoga Padhi” music from Sounds of Isha was weaving its soothing magic. It was such a beautiful sight.

It was amazing to see them going beyond the traditional norms and customs in the class. For example, the gents and ladies almost never sit together during any public event. But here in the class, they sat together and interacted and it was a big thing for them. The ladies would never talk in public, so one lady was almost in tears while sharing how big an experience it was for her to overcome her fear and speak on the microphone.

Yavatmal and Ghatanji and all the villages around them are troubled areas. When the participants came and shared about their lives after the class, the amount of suffering that they have to go through really shook me. Despite all that, they are somehow going through it all while keeping their sense of humor intact. There were so many jokes during the class, and I have not laughed as much in any class as I have in this one. The jokes are hard to articulate as most of them are language specific, but I can say that the innocence and openness with which they participated in the class really touched me. Many times the space felt like Sadhguru’s love just holding them all like little children.

I would like to paraphrase one of the sharings on the last day – “I thought I came here to learn some Yoga, but I never thought it would change my life and above all change me as a person from within. Right from the way the volunteers do Namaskar, the way the footwear is kept, the way it feels to walk into the class, I have never seen or experienced anything like this. I feel that this is just the beginning. With me and these few people here, very soon the whole village is going to change.”

The Impact – A Miracle Unfolding

The village community is very closely knit together. If a hundred people in the village do the class, it does have a big visible impact on the atmosphere in the village. The Nadi Veeras are right now working not just for the river, but for the overall development of the lives there. So this is not just about rejuvenating the river; the whole community seems to be going through a fantastic personal transformation.

I am extremely grateful to have witnessed this miracle that is unfolding in this remote part of Maharashtra that has seen such enormous suffering for years.