A  nation is not a reality. It is only an idea. Rather than dividing people on the basis of race, color, caste, creed or religion, it is dividing people on the basis of nationhood. This strong sense of very clearly demarcated nations only truly exists in the last hundred years.  Before that, nationhood was not such a strong idea. There were many people on the planet that did not belong to any nation. Not anymore. You must belong to some nation. Otherwise, you must be an alien.

Today, there is no way any human being can exist on this planet without belonging to a particular nation because you need a passport, you need an ID. You are not allowed to be a nobody – you have to be something which belongs to something else. It is not such a great idea, but for now, to take the large masses of people on this planet ahead in some way, a nation becomes an important idea. Without this idea, many people would be left out of everything. In this context, India becoming a republic is an important day in the life of this nation, and in the life of the people of this nation. 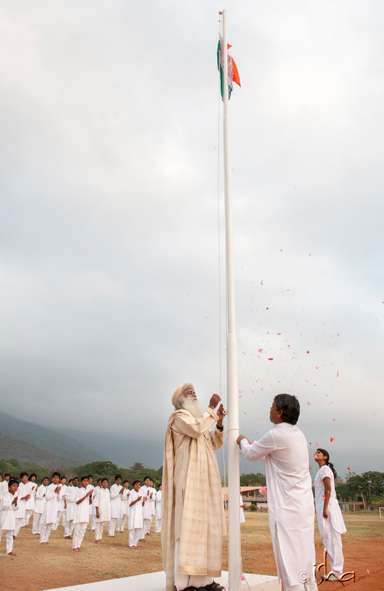 Many people may not want to live in India, but they would like to come back and die in India! There are sacred places where they believe that if they die, they will find their liberation. It has become a farcical thing today, but there is a certain realistic basis to it. Why is it that people think that a particular land is a better possibility than the other? This is so for every aspect of life. If you want to study, you go to Australia, the UK or the United States.

Certain spaces were created for certain possibilities. Education means you want to go to one place. If you want to learn classical music, you go to Chennai and so on. Similarly, for liberation, people have been coming to this land for thousands of years because the technologies of inner possibilities were so hugely explored and manifested, and machines like Dhyanalinga were built. It is a tower of light. If you want to access something and you can do it by yourself, fantastic. But how many can do it without a certain tool or external help?

Because of this, going to the right place for the right things becomes a relevant process. India has always been a spiritual gateway. In that context, maintaining the fundamental ethos of this nation becomes very important, and we as a nation become very important for the rest of the world. If you revive the knowledge base that exists in this country even today, you can run the whole nation on just this because even the most rudimentary things about the inner nature of the human being are confounding people around the world. Here, these explorations have happened for thousands of years. Our R&D has been a phenomenal investment of human beings. People dedicated whole lifetimes, for generations and generations, just to know what the nature of this one is. If we bring this back, the whole world will want to come to India for their inner well-being.

Death
Related Content
sadhguru spot
Living Death
In the latest Spot, Sadhguru welcomes the new year with an important reminder to become more intimate with life’s only certainty – death. We’ve grown used to perceiving death as a horrible thing, but Sadhguru explains that like inhalation and exhalation, we must embrace both, life and death. He guides you how to make the right choices and how to sparkle in your existence. Through an embodiment of “living death,” you create a different possibility for how to spend your time on this planet.
Jan 10, 2020
sadhguru spot
Vanaprastha: Becoming Conscious of Your Mortality
On this Spot, Sadhguru answers a question on vanaprastha, in Indian tradition the last phase of life, where one withdraws from worldly activities and into the forest. How does living in the forest help you die well? And is this traditional prescription still relevant in modern times? Read on to find out.
Oct 10, 2018
sadhguru spot
Loosen Your Grip
This Spot, Sadhguru shares the background to his latest poem “Mingle,” as well as his observations on why it is a struggle for human beings just to be happy. He says, “You are life – everything else, including the body and the mind, are accessories to life. Accessories are there to facilitate and enhance, not to overshadow or occupy life.”
May 31, 2017
Close