December 1st is World AIDS Day. In this article, taken from a sathsang conducted by Sadhguru with those living with HIV/AIDS in 2007, Sadhguru speaks about the problem of HIV, its challenges and possible solutions.

ArticleNov 29, 2015
December 1st is World AIDS Day. In this article, taken from a sathsang conducted by Sadhguru with those living with HIV/AIDS in 2007, Sadhguru speaks about the problem of HIV, its challenges and possible solutions.

Sadhguru: Today, there have been many developments in science and medicine, several preventative measures like vaccination have been developed, but in spite of that, we have a situation now where there are several diseases for which there is no remedy. Even as we go on inventing new remedies, nature keeps posing us new challenges. This will always be so. When a new challenge arises, needless emotions and needless hostility relating to them in society also arise. But, after a while, when everyone understands how to fight these challenges, then it is no longer a big issue.

This has happened again and again in our society. Currently, there is a lot of hostility in society towards a person infected with HIV. This is mainly because of lack of understanding among the public about the nature of the disease: how people get it, how it spreads from one person to another and what we could do about it. In society, people have no understanding of this disease. Every person fears that he may somehow get it. There is this fear that one may even get it by just looking at an HIV patient. To go beyond this fear, we need to spread the necessary awareness.

Even with HIV, if we maintain our life energies in an intense state, our immunity and the power to resist diseases can be increased to a great extent.

You see no such deep hostility in Western countries because they have gained the necessary understanding about this disease. It is important that we bring about a similar situation in India too. If we make everyone in society have a proper understanding of this disease, it will not be a big issue here also. There are many diseases which affect a man and cause him to suffer. It is not that he suffers only because he is affected by HIV. If you look at it, HIV in itself is not a disease. It is the loss of immunity in the body that weakens it and takes away its ability to resist diseases. If you look around, everybody does not have the same level of immunity. Some people become sick merely by eating something sold on the roadside. Others are not affected by whatever they eat. This is because the power to resist diseases, the immunity, is not the same in every person. With HIV, one’s power to resist disease becomes very low, because of which one may get all kinds of diseases.

But even with HIV, if we maintain our life energies in an intense state, our immunity and the power to resist diseases can be increased to a great extent. We may not be able to restore it completely, but we can surely increase it to a large extent. If we pay some attention to how we eat, how we breathe, how we act, how we live and so on, we can certainly increase our power to resist this disease.

It is our intention to offer this possibility to one and all. When a person suffers, it is natural for another person to be sensitive to his suffering. This much sensitivity and this much humanity exists in everyone. But we have put our sensitivity and our humanity out of action. This is because we have come to all kinds of wrong conclusions about those suffering from the disease.

If we had an entire culture, which was rising beyond the physical dimension of life, these things would be in control to some extent.

This is not only the case with HIV, but in the world several kinds of terrible things are happening for various reasons. People have been made to suffer for ages because their caste is not right, their religion is not right, their gender is not right, and so on. So, do not think that this hostility is only with regards to HIV alone. There are all kinds of nonsense going on in society and this is one of them.

HIV/AIDS is no more just a medical problem, but a social crisis in the making. In fact it is spreading into epidemic proportions in India. Western countries have handled HIV infections quite effectively, but slowly, HIV/AIDS is becoming the scourge of the poor nations.

Africa is reeling under its impact. At one time we thought that in a country like India the disease would not spread very rapidly because of strong social codes. Obviously, we have been wrong in that assumption. The fact that today even the rural populations are getting infected means there are many aspects of the society, which we have not understood properly. Even though it is very important that we strengthen the family structure, let us be clear that such a thing is not going to happen just because we advise people to do so.

If we had an entire culture, which was rising beyond the physical dimension of life, these things would be in control to some extent. But today we have embraced the market economy to such a point where it is all about give and take. It is all about who is getting the best out of whom. When this has become the modality of life, when all the ideologies in the world have disappeared and it is all about the market, you cannot keep the market out of the house either. You cannot banish the market from your family. It enters your family also.

Regardless of the causes which have brought us to this point, it is extremely important that the problem of HIV/AIDS is handled on a national scale with all the necessary involvement from all groups of people. 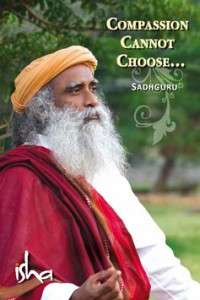 Editors Note: This article is an extract from the ebook Compassion Cannot Choose, which is a collection of interactions between Sadhguru and people living with HIV/AIDS.

Related Content
article
6 Remarkable Stories of Agastya Muni’s Life
One of the Saptarishis and a direct disciple of Adiyogi Shiva, Agastya Muni was a being of tremendous proportions. His tireless efforts ensured that the spiritual process became widely available to the common person.
Dec 20, 2021
article
Bhairavi Sadhana – Significance and Benefits
Open to both men and women, Bhairavi Sadhana is an intense process to enhance one’s receptivity to Linga Bhairavi’s grace. Sadhguru explains the significance of this sadhana and the benefits one can reap from it.
Dec 11, 2021
article
Save the Soil to Save the Environment
Ensuring that our soil is rich and fertile is key to avoiding an ecological disaster. Sadhguru explains the importance of soil revitalization and shares five methods we can use to save the soil.
Nov 30, 2021
Close