Sailing Solo Around The World? Shambhavi Mahamudra Can Help

Lt. Cdr. Abhilash Tomy recently became the first Indian to complete a solo, non-stop and unassisted sailing trip around the world. Here is a sharing of how he fared and how Shambhavi Mahamudra helped him cope during this record-breaking feat.

Lt. Cdr. of the Indian Navy, Abhilash Tomy recently became the first Indian to complete a solo, non stop and unassisted sailing trip around the world. Here’s a sharing of how he fared and how Shambhavi Mahamudra helped him cope during this record-breaking feat. In an email to an Isha Yoga teacher describing how Shambhavi helped him during the journey, he writes:

Abhilash Tomy: People have often wondered at the level of physical and mental fitness required to undertake such a voyage where you are out at sea at the mercy of the elements and sail around the world alone and without any help from anyone and I always tell them that meditation helped me both physically and mentally. I would always begin my day with Shambhavi (except the preparatory part because the boat would always be tossing about in rough seas) My voyage was one full of difficulties but I was always in a blissful state. Even in the worst conditions at sea I would be very happy and I laughed in the face of all troubles. I think I should attribute a big part of my success to Isha because the kriya kept me in the best condition possible during the voyage.

Here’s a look at Abhilash’s experience of circumnavigating the globe all by himself, which took him 151 days.

At Cape Town With Cdr. Donde.

Project Sagar Parikrama 2 aimed to circumnavigate the earth solo, non stop and unassisted under sail covering a distance of at least 21,600 nautical miles, taking the boat south of the three great capes, viz., Cape Leeuwin, Cape Horn and Cape of Good Hope. The voyage was cast off on 01 Nov 12 by the FOC-in-C West, Adm Shekhar Sinha from the historic Gateway of India at Mumbai.

Crossing the Equator for the first time

In the course of her voyage, the boat ran into the doldrums in the outbound leg and was briefly becalmed before crossing the Equator. She then headed in to the trade winds and along a S ly to SSW ly course till almost 30 deg south before being hit by the first Eastward moving Cold Front. The first Leg completed on 12 Dec when she passed Cape Leeuwin. By this time, both the skipper and the boat were well settled. The skipper and boat crossed the International Date Line on New Year’s Eve and sailed further south into the Pacific Ocean all the way up to 58.5 deg S possibly becoming the only Indian to have gone that far south in a sail boat. The boat rounded Cape Horn on 26 January and unfurled the national tricolour just one mile south of the Horn. The first land sighting after leaving Mumbai happened at Cape Horn followed by Staten Island the next day. That was also the first sighting of another vessel at sea after leaving the Indian sub continent. The boat continued on her voyage and crossed the Prime Meridian on Valentine’s Day and rounded the Cape of Good Hope on 19 Feb before entering into the Indian Ocean. The boat and skipper then headed north-east and then North and crossed the Equator on Spring Equinox before being briefly becalmed. The circumnavigation was officially over when the boat entered Mumbai on the Easter Sunday of 31 Mar 13 and on 06 Apr she was accorded a ceremonial reception by the President of India at the Gateway of India. The event was also attended by the Governor of Maharashtra and the Chief of Naval Staff.

During her voyage, the boat went through almost all the weather zones possible starting with the doldrums at the Equator followed by the ITCZ and trade winds. After leaving the tropics, the boat entered the area of Cold Fronts where gale force winds regularly hit the boat. With temperatures in the region of 3-7 degrees, the constant threat of icebergs, winds averaging 30 knots, swells at 3-4 meters and no practical rescue for miles, the Southern Ocean is the most difficult part of the world to sail. The boat was constantly lashed by 40-50 knot winds and at one point, when the boat was rounding the Cape of Good Hope, she encountered 70 knot winds and 10 meter waves.

The Winds Would Get Quite Rough Sometimes

Despite the difficult weather systems, the boat and the skipper fared well sustaining only minor issues along the route. Problems with generator, engine etc. were attended to by the skipper; ropes were constantly repaired and torn sails either stitched or replaced; minor fibre-glass and carpentry work attended to; electrical issues sorted out as the boat sailed along. The only RO plant in the boat became defective almost one-third of the way out of Mumbai, and towards the end of the voyage the stored water in the tanks and part of the bottled mineral water were contaminated as a result of a diesel leak onboard leaving the skipper with about 10 liters of fresh water for as many days of sailing left to complete the voyage. The skipper then resorted to rain water harvesting and conservation of water to complete the voyage. 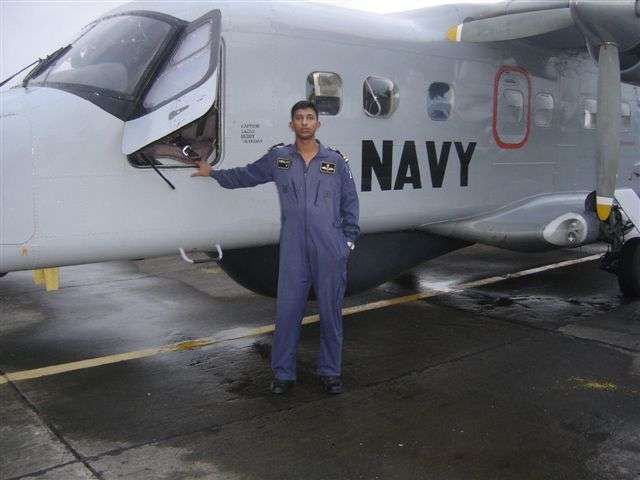 When Lt. Cdr. Abhilash Tomy arrived at Mumbai on 31 Mar 13 he had become the 1st Indian, 2nd Asian and the 79th person in the world to have sailed around the world, solo, unassisted and non stop.

The Project has helped the Indian Navy to showcase itself to the world in terms of its maritime reach, the confidence of its personnel and its own ability to plan and execute difficult missions.

Editor's Note: Inner Engineering is a technology for well-being derived from the science of Yoga. It is offered as a comprehensive course for personal growth that brings about a shift in the way you perceive and experience your life, your work, and the world that you live in.

The objective of the program is to render you to explore your highest potential through powerful processes of self transformation, distilled essence of classical yoga, meditations to address key aspects of life and access to secrets of ancient wisdom.

Inner Engineering offers a unique opportunity for self-exploration and transformation, leading to a life of fulfilment and joy.