In Conversation with the Mystic, August 2013

Sadhguru interacts with leading personalities of society in the latest episodes of In Conversation with the Mystic. The conversations can be followed through live updates on Twitter.

Sadhguru interacts with leading personalities of society in the latest episodes of In Conversation with the Mystic. The conversations can be followed through live updates on Twitter, #SadhguruLive. 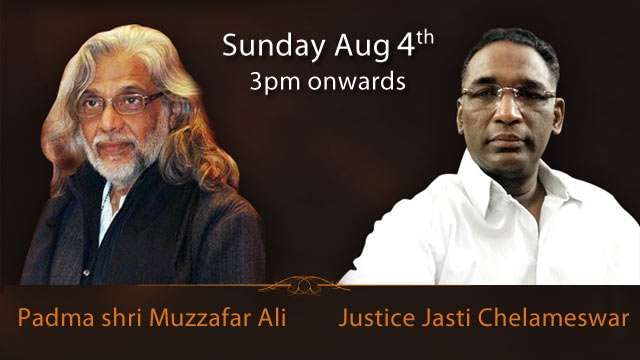 There will be a break between 5 - 6pm, the second half of which will feature Sufi music followed by the next conversation.

Muzaffar Ali is a fashion designer, poet, artist, music-lover, revivalist, and a social worker. He belongs to the Royal Muslim Rajput family at Kotwara.

Dilip Cherian is the CEO of the image management consultancy Perfect Relations. He is a communications consultant, a political campaign advisor and a practicing political & policy professional.

Tarun Tahiliani is a noted Indian fashion designer. He is best known for his ability to infuse Indian craftsmanship and textile heritage with European tailored silhouette. His signature is to combine traditional aesthetics with modern design.

In Conversation with the Mystic is an exclusive series of interactive episodes where eminent personalities from various walks of life explore a range of subjects with Sadhguru. Amidst engaging stories and witty jokes, Sadhguru bridges the gap between the modern and the mystical and opens the door to deeper dimensions of life.