The day of the first ever Shambhavi Mahamudra Program conducted by Sadhguru began aptly with a thunderstorm! What an intense day for Isha Singapore! Nothing could dampen the spirit of the Singapore volunteers though, who were organized to the T. Months and months of planning, meetings and running around finally culminated in a beautiful first day of the program. With 500 participants, and 250 volunteers, the whole venue complex was abuzz!

S ingapore – a beautiful tropical island and truly a melting pot of cultures. On 31st March and 1st of April, it witnessed a phenomenal event that had people coming in from China, Japan, Germany, Australia, Thailand, Malaysia and even from Canada.

The day of the first ever Shambhavi Mahamudra Pragram conducted by Sadhguru began aptly with a thunderstorm! Nothing could dampen the spirit of the Singapore volunteers though, who were organised to the T. With eyes closed, one would never guess the furore of activities that were happening from all teams - registration, dining, hall, seating, delivery, audio/ video, stage, decoration - it was done that silently. It was truly moving so see everyone walk about so graciously and pouring their love into all they were doing it. 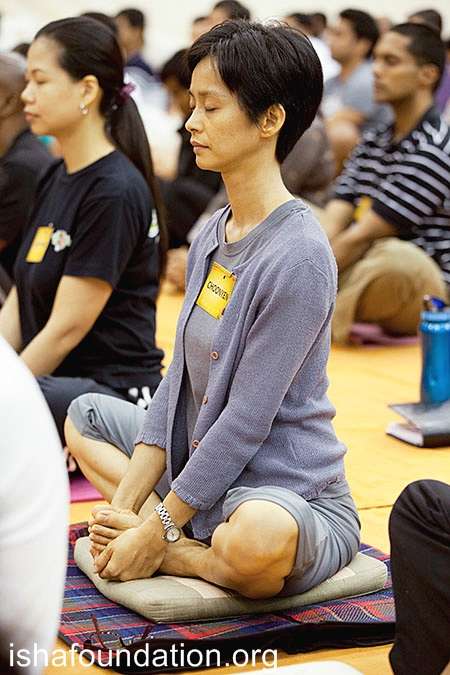 What an intense day for Isha Singapore! Months and months of planning, meetings and running around finally culminated in a beautiful first day of the Shambavi Mahamudra program. With 500 participants, and 250 volunteers, the whole venue complex was abuzz! Having worked through the previous night, the morning was spent straightening out last minute issues and giving final touches to everything. When the participants walked in to the hall, they were greeted by smiling volunteers, and a beautiful hall. What was previously a sports hall had been transformed into an absolutely amazing Isha Yoga venue. The decorations on the stage, the carpets, the music, everything seemed filled with the loving care given by the volunteers, and created the perfect atmosphere for the participants to drop everything else and begin their inward journey.

Soon it was time and participants started to come in. I went into the hall and it was transformed - like a caterpillar metamorphosed into a butterfly, it was unbelievable! You could see that in the faces of the participants - who after 7 modules of Inner Engineering online had no idea what to expect. Their eyes shined though like little children and their faces lit up as they entered.

There was pin drop silence as Sadhguru entered - til now the participants had only seen him online and he was now in front of them. While most were in anticipation, some were already in tears, some smiled gleefully and others looked on. Not knowing what to expect, each and everyone were very attentive. Sadhguru had them laughing one moment and stunned them in the next, pensive in one and taunting in the next.

The participants from China didn't know English so they had a translator and headphones on. Without knowing a single word of the language, this group of ten came all the way from mainland China. I had a sense of wonder as I watched them for they seemed to enjoy it immensely and queried with exceptional humility. I had questions like how, why, what made them do this and by simply looking at them I got the answer that can't be put in words. The program itself went very well, as the participants were fully involved, and Sadhguru charmed everyone with his humor and wit to gently prod them to look at their self and explore their own being.

In the wee hours of Sunday, curious participants made their way to Pasir Ris park, not sure what Sadhguru was going to throw their way next. Their curiosity soon turned into enthusiasm as they were joined in by joyful volunteers cheering them on through an exciting games session. The initiation afterwards left the participants spellbound. Many of them came out of the hall describing how tears were just rolling down their cheeks during the process. This was followed by a delicious lunch with live music from Sounds of Isha!

The last part of the day saw a lively question and answer session with Sadhguru, followed by a another powerful process that took the participants and volunteers to deep levels of meditative bliss.

The program ended with the Ananda Alai song by Sounds of Isha, and joyful dancing by the volunteers and participants. How deeply each and every participant and volunteer had been touched in just two days was visible to all. The experience of the whole program was wonderful, and left everyone at a loss for words. In fact, some volunteers were already heard planning, in hushed voices, for Sadhguru's next visit to the island...