Isha Gramotsavam 2015 - the grand finale of a month-long sporting extravaganza that has gripped rural Tamil Nadu! Enjoy a front row seat for the action through our live blog coverage.

Isha Gramotsavam 2015 - the grand finale of a month-long sporting extravaganza that has gripped rural Tamil Nadu! Featuring the thrilling final matches of volleyball for men and throwball for women, as well as traditional village games including Kabaddi, Uri Adi (hit the pot), Silambaatam (stick fighting) and Valukamaram (pole climbing), the tournament is an opportunity for everyone– man or woman, young or old, irrespective of caste or creed – to revel in the joy of the game and the spirit of competition and collaboration.

Enjoy a front row seat for the action – catch our live blog for coverage throughout the day and follow #GramotsavamWithSachin for live tweet updates. Register for the live webstream to join the Closing Ceremony featuring prize distribution by Sachin Tendulkar, Sadhguru’s talk, and exciting cultural performances! 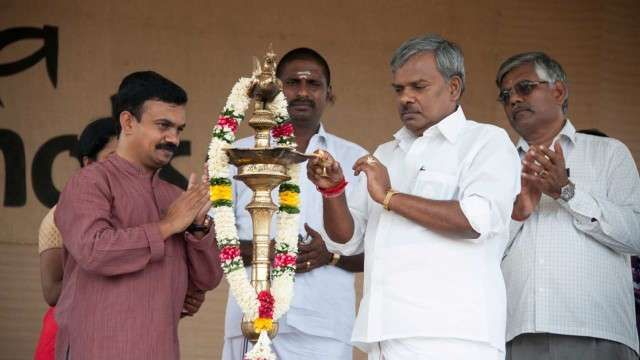 Isha Gramotsavam 2015 has begun! Shri Nagarajan, member of parliament from Coimbatore, inaugurates the games and greets the players for the first match of the morning – the throwball semi-final between Muruganpudur-Gobi and Devarayapuram-Kovai. The match begins with drums and cheers from the full stands!

At the half, Kovai leads the match 25-16. Both teams play with remarkable energy, with players of a wide range of ages – from daughters to grandmothers

Cheers of “Isha Vidhya!” greeted the Sandegoundan Palayam throwball team at the start of their match against Kolappulur. After a spirited game, Kolappulur emerged the victors, and will advance to the final match against the other semi-final winners Devarayapuram-Kovai, to be held later today.

Excitement surrounds this year’s festivities due in part to Chief Guest Sachin Tendulkar. Signboards throughout Coimbatore city display the cricketing hero alongside Sadhguru in advance of the evening’s finale. Today, Isha Yoga Center will also welcome Sachin for a special visit.

We caught up with the champion cricket team from Pothanur - “Men in Blue”, who won 4 matches including the finals against Singanallur Jayenthra Academy to win the Rejuvenation Shield. They’ll receive the award this evening from Sachin. Team captain Stephen shares, “We have practiced a lot to win, and to receive the award from Sachin is a great thing. Thanks to Isha Gramotsavam for making this happen for us.” Team coach Tyson expressed how proud he is to coach the winning team. Man of the Series Abhilash added, “I have no words to express my joy. We hope to continue to play at the state level.”

A troupe of young athletes from the Indian Silambam Federation drew a crowd at the CODISSIA grounds, showing off prodigious skill in individual and group category Silambam, a traditional martial art using long sticks. All ages were represented in the group, with the youngest fighters appearing no more than 5 years of age! The participants hail from across Tamil Nadu, mostly from rural areas, yet have achieved great success at the district, state and even national levels, shares coach S K Ponnuchamy.

The first set of the Men’s Volleyball Finals is underway with Arasampatti facing off against Trichy. The winner will be determined later today, as the final set will be held as part of the Gramotsavam grand finale in the presence of Sadhguru and Sachin.

Trichy is in the lead following the first set of Volleyball finals. Now begins the Final showdown of Women's Throwball - teams Kolappalur and Devarayapuram take the court.

Thousands have gathered here at CODISSIA grounds for the final matches of Throwball and Volleyball. Devarayapuram currently in the lead of a close set, keeping the crowd on the edge of their seats, and even on their feet cheering the match.

Sadhguru and Sachin have just arrived - the packed crowd going wild with cheers for Sadhguru and the cricketing hero! Sadhguru starts off the final set of the women's throwball match by providing the service.

Over 60,000 sports fans from across Tamil Nadu fill the grounds for the thrilling final matches. Devarayapuram leads 22-9 as drums from Sounds of Isha encourage more cheers for the intense set!

Sachin and Sadhguru award the prizes for Kabaddi and Cricket finals. The Men in Blue receive their trophy, as well as first place Kabaddi team Karunya. Glowing smiles on the faces of all the players are impossible to miss as they receive their trophies.

Sachin provides the first service for the men's volleyball final round!

After a lead throughout the match, Devarayapuram throwball team is victorious!

Trichy holding the lead 6-4 against Arasampatti - an epic set so far!

Sachin joins in the cheers - encouraging the crowd as well as the players from both sides.

The men's final set pauses midway, and Sadhguru, Sachin and teams head to the main stage to enjoy a demonstration of Kalari from Isha Samskriti.

Throwball winners Devarayapuram joyously receive their trophy from Sachin along with cash prize of Rs 25000.

"Not always I went out and I succeeded...but sport taught me to get up on my feet again and to compete in the right spirit."

"Sport teaches you teamwork, and teamwork can never fail" - Sachin

"I noticed some matches here. What I appreciated the most was the spirit that both the matches were played" - Sachin

Sadhguru reminds us that over 70% of India's population lives in rural areas - "If they cannot play, we have a nation that will become stagnant and sick over a period of time"

"The youth who are jumping Sachin, Sachin - I want all of you to take up some sport," Sadhguru declares, inspiring the thousands of young people in the crowd to get involved in sports. "If you are still alive, that means you're young enough to live!"

A big surprise at the end of Sadhguru's talk, as he grabs a ball and bowls for Sachin onstage!

Thanks to all who have joined the live web stream. Hope you have enjoyed the rural spirit with us.