Gearing Up for the Wipro Chennai Marathon!

We don’t usually associate marathons with monks, but at the Isha Yoga Center, 20 brahmacharis, sanyasis and brahmacharinis have been training for the Wipro Chennai marathon on January 31, 2016.

We don’t usually associate marathons with monks, but at the Isha Yoga Center, 20 brahmacharis, sanyasis and brahmacharinis have been training for 3 months, to run in the Wipro Chennai Marathon on January 31, 2016. In addition, seven residents from the ashram will join them in the marathon, which will also see 600+ Isha volunteers from Chennai participating. All of them will be running to raise awareness about rural education, and to raise funds for the Isha Vidhya schools in rural Tamil Nadu which provide low-cost, high quality education to over 6400 kids. As one of the swamis said, “We just wanted to see what we could do to support Isha Vidhya, and we thought running the marathon could be our small way of contributing to the cause.”

Training for the Marathon

For almost all the runners, this will be their maiden marathon and they will be running the half marathon distance. Most had never run long distances before, and many started out with no shoes! Since almost everyone at the yoga center walk around barefoot, some of the budding runners began their training running barefoot or in flipflops! The training was kicked off by Ajit Singh, an experienced pacer and runner from Mumbai who visited the yoga center in September 2015. With support and coordination from Peggy, a fulltime resident, and Swami Nirakara – both of whom have run several half marathons – the enthusiastic runners began to follow a hectic training schedule: 3 runs a week, 2 strength training sessions and 2 rest days. Ajit sent his sharing over Whatsapp, wishing everyone the best. “I’m really happy that they are now able to run more than 18, 19 kilometers. I wish them all the very best for the upcoming run on Sunday.”

A month into the training process, the run-walk-run-walk “technique” of many had matured into a proper rhythmic run. Everyone had graduated from the initial distance of 2 kilometers to a fairly painless 10 kilometers.

The concept of rest and recovery days was a bit alien to the first-time runners. But while starting out, one has to gear up gradually. Another aspect was that everyone wanted to go for long runs every time. But the more experienced runners gradually coached them on the plus points of including short tempo runs, interval runs and even hill runs as part of the training schedule.

A month into the training process, the run-walk-run-walk “technique” of many had matured into a proper rhythmic run. Everyone had graduated from the initial distance of 2 kilometers to a fairly painless 10 kilometers. Training as a group and encouraging each other went a long way. One of the brahmacharis shared, “Usually I’m not someone who sticks to any physical practice steadfastly. But I’m grateful for the way we have supported each other joyfully and enthusiastically, which has helped me stick to the training.” Another runner spoke of the training process and its plus points. “The strength training with specific instructions helped to tone up the front leg muscles that initially gave me pain and had me worried about whether I could run. Now, I feel happy to make use of all those muscles I never thought existed!”

Issues with old shoes, soles coming off, blisters and pains were also entirely eliminated thanks to generous donations of running shoes from the Mumbai Road Runners and Bangalore Runners groups. Nagaraj Adiga, race director of the Bengaluru Marathon, also came forth and sponsored several new pairs of running shoes. What a delight and difference those shoes made! One runner whose size we did not have and who was running barefoot for weeks says, “Peggy got us some shoes, and the first day I ran with them, I realized what a wonderful experience it is to run with shoes!”

For long runs outside the ashram, other volunteers would come along to ensure the runners’ safety, what with stray dogs barking, and trucks and buses passing by. Cruising up and down the line on cycles and electric scooters, they not only motivated the runners but acted as mobile water carriers and kept the atmosphere lively and vibrant. And at the end of the long run, the tired muscles and smiling faces were in for a treat – chocolates!

In December, the runners got another boost and technical inputs from a group of 5 seasoned Bangalore runners – Shreyas, Harsha, Rahul, Gajendra and Mahalakshmi – who visited the ashram. The training session with them was yet another eye-opening experience into the discipline of runners out there in many metro cities. Their varied trainings include hill runs, interval runs, sprints, and focus on negative splits to end strong!

Running for Isha Vidhya has made a significant difference for the students studying in these rural schools. Thanks to volunteers who have run and raised funds over many years in the Mumbai, Bangalore, Hyderabad, Delhi, Chennai and San Francisco marathons, Isha Vidhya has built 40 classrooms plus furniture, compound walls for 8 schools, and above all, provided scholarships for over 2000 children.

Some statistics about the state of education in India

Just how much support do kids in rural India need when it comes to education? Here are a few statistics that give you an idea. 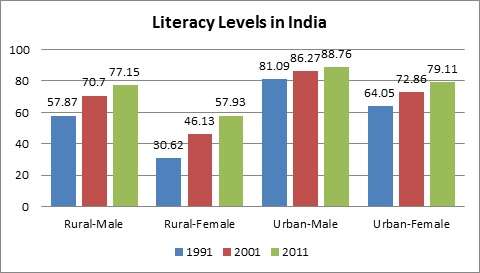 As a country with a significant young demographic, which according to studies, is likely to result in 70% of the population falling in the working age group by 2025, India’s future surely lies in the education of its children. Without quality education, not only is the nation’s future bleak, but its demographic dividend could well turn out to be a demographic burden as well.

Part of Isha’s social outreach programs, Isha Vidhya is a non-profit organisation founded in 2006. It is committed to raising the level of education and literacy in rural India and helping disadvantaged children realise their full potential. Isha Vidhya runs nine rural schools in southern India with 6415 children. 58% of students are fully on scholarship-supported tuition, and the rest pay a subsidized fee. Many students are first-generation schoolgoers from their families. Isha Vidhya also encourages the education of girls, actively working with families and communities in this direction. 46% of students at Isha Vidhya are girls.

Isha Vidhya’s uniqueness lies in its high potential for scalability and replication.

Students have access to transportation to and from school. Lunches are provided at some of the schools and students receive regular nutritional health supplements. School buildings are designed in open-concept, classroom clusters that are architecturally intriguing and inspiring for the students. In-school celebrations of traditional festivals and holidays help keep educational and cultural values alive.

Isha Vidhya’s uniqueness lies in its high potential for scalability and replication. The Isha Vidhya schools follow a carefully planned methodology designed to educate and nurture the wellbeing of rural children on all levels – academically, physically and mentally. The approach has been specially designed to compensate for the absence of an English-speaking environment at home and the shortage of qualified teachers, creating a scalable model for delivering quality education.

Extensive libraries with print, audio, video and computer materials enhance the learning process. All the education at Isha Vidhya revolves around recognition and celebration of the identity, culture and tradition of the rural communities. From CD ROM lessons to organic farming, Isha Vidhya schools empower rural children to have vocational options.

Through critical interventions in 56 rural government schools in Tamil Nadu and 460 schools in Andhra Pradesh, Isha Vidhya also benefits an additional 72,000 children. Isha has supported and enhanced these schools by maintaining the recommended pupil-teacher ratio of 35:1 with additional teachers, conducting training modules for teachers, student remedial classes for basic literacy & numeracy skills, as well as conducting a host of extracurricular activities such as yoga, sports and music.

Editor’s Note: For more information on Isha Vidhya and how you can support them, follow them on Facebook or visit their website. If you are interested in running for Isha Vidhya, drop a mail to prabhu.loganathan@ishavidhya.org (India) or peggy.wolff@ishavidhya.org (worldwide).